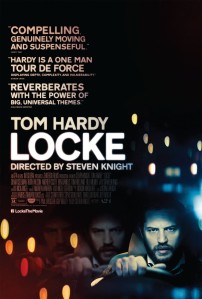 For Ivan, every bump in the road signifies another life collision. As he gazes through the car window, eyes lamenting, a struggling reflection cast before us, we recognise him as a decent human being in the midst of self-inflicted calamity. Phone calls offer a moment of salvation: relief, anger, humour, misery. But still, salvation from lawless thought. Often, Ivan — a man of structure — joins up the dots in his own life by relating an ingrained knowledge and valuing of cement and stability to the current unsavoury predicament in which he finds himself, and occasionally the driver turns to an empty back seat in order to converse with his deceased father. It’s in these moments of spiritual bartering that Locke struggles to maintain order. Remember, Ivan is a man of structure and the film thrives not through obvious semiotic links, but by way of his empirical, rubble-gathering conversations. Not to mention an exceptional solo performance.

As the night’s misty ambience shrouds his car, construction boss Ivan Locke (Tom Hardy) finds himself driving away from a highly imperative job at work through circumstances stemming from a past action that was not at all beyond his control. From home, his son continues to phone and commentate the latest football match, and from work, higher-ups and lower-downs transmit more bad than good news. But it is a situation on the periphery of his normal day-to-day existence that has Ivan abandoning domestic and occupational ship tonight. A birth — one primed to send a stake through his life.

Locke is about as ambitious as any film can get within the confines of a car and boasting a solitary character hampered by a snivel-inducing cold. Plot doesn’t really exist, at least not in its customary tangible form that encourages the camera to follow the actions of different people, to different places, in order to relay new actions. Rather here, any quintessential plot twist or narrative advancement lies at the mouth of Tom Hardy, whose words and facial expressions both have a defining hand in dictating every element of the film. At its core then, in order to be a success Locke perilously relies on a compelling central performance. And it certainly gets one.

At no point does the cinematic spotlight retreat from Tom Hardy. The Londoner has nowhere to hide — just like the man he is portraying, the car is his temporary prison; a voluntary prison, one that both Hardy and Ivan choose to enter. (His name, Locke, hints at confinement.) Further complicating matters, the actor must relay a rich Welsh accent for film’s entirety. It’s put up or shut up time and at no point are we crying out for Hardy to shut up. His dialogues caressed by a wonderfully thick cadence, the man behind the wheel not only garners audience sympathy, but also demands a degree of exasperation by way of an incessant need to fix everything (not to mention a prior noteworthy error in judgement). When Ivan converses with his son Eddie, voiced by Tom Holland, we can hear the compatible trust and loyalty between the pair. Misguided trust? No, not all. Ivan is too genuine in repentance. Yet when we ear-drop in on a discussion between Ivan and Donal, a colleague, it is obvious that the former’s practical desire to amend is being dispersed in the wrong direction. (“I want to talk about a practical next step,” he repeats.) That is, towards his job and not his family.

In establishing Ivan as an ambiguous sort, Hardy leaves it up each individual eavesdropper on his journey to decide whether or not his moral compass is shattered, cracked or still intact. Writer/director Steven Knight plays a role in formulating the character, of course, but Hardy’s delivery must be spot on otherwise the film is doomed. The lead is wearing so many different hats too: father, husband, son, consulter, instructor, peace-keeper. There’s not a single moment of respite in sight, not until he reaches his destination and by then, we’ll be gone. Hardy must relentlessly alter appearance without taking a breath. His character Ivan says it himself: “I have a list of things I have to do tonight when I’m driving.” Carrying wholesale weight on his shoulders, the actor remains poised throughout. If he hadn’t already appeared as Eames in Inception, or as Bane in The Dark Knight Rises, this is the type of performance that would’ve propelled Tom Hardy up an acting echelon or two. Instead, it’ll simply cement his lofty place.

In a film as minimally scoping as Locke, a slow and effective plot that builds towards an emotive, tense crescendo is necessary to go alongside a commanding central performance. When Ivan converses with air over his own mistakes and resultantly flip-flops between placing blame on his father and on himself, the outing loses some tension-building momentum. The character is one stimulated by integrity — a structurally damaging change in cement for his building enrages him, and he is left disheartened by a self-generated misdemeanour, two varying instances of corrupt integrity that affect Ivan. Whenever a phone call ends, the car dashboard re-manifests as an electronic satnav, telling us all we need to know about Ivan’s life and where it is headed: straight ahead, approaching isolation, dictated by others. Simple aesthetic insights such as the one offered by said satnav are alluring, unlike the occasional obvious and over-egged metaphysical spiels that don’t do Locke any favours.

Unlike Buried, a film that spends its runtime trapped within a coffin alongside Ryan Reynolds, there’s ultimately no concrete pay-off. Perhaps this has something to do with the aforementioned philosophical interceptions in narrative, jarring much pressure-building. It is also conceivable that Knight writes himself into a tricky conclusion, where there is no justification for an unambiguous ending. This isn’t necessarily a negative — credit must go to Knight for sticking his neck on the line and making a film as experimental as Locke, particularly in an era pillaged by financial behemoths where even low-budget productions cough up allocations of around £10 million. (Locke was made for less than £2 million.) At heart, it is the typical redemption story, only without any typical advantageous factors apart from dialogue — no emphatic score, or distressed damsel, or soaring visual palette. Not even an outright hero. The closest we get to unbridled tension comes during conversations between Locke and any other voice, rather than an empty back seat. Confusion rears and urgency arises, compounded by the screeching sound of sirens and flashing lights from police cars that intermittently race past in the outside world.

Ivan’s journey to London is an exercise in personal demon exorcism, and you are the judge in this tale of uncertainty. One thing is for certain though — Locke is a damn good attempt at something different. Narratively-speaking, the film doesn’t scintillate as much as it wishes to. Performance-wise, it just might. 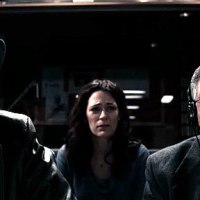