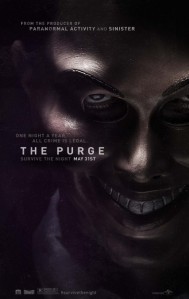 The Purge opens promisingly: a cascade of slowly enveloping surveillance feeds show a timeline of violence, both unadulterated and raw. It sets the scene, year 2022, the images depicting acts of inhumanity committed on the one night that they’re legal. The feed hints at a lack of security, infusing a sense of realism and close proximity to home whilst also suggesting what we’re about to see is 21st century brutality. But that’s not quite what follows. Despite a promising start, James DeMonaco’s film, although mindfully suggestive and thoroughly polished, never really fulfils the ambitions towards which it initially embarks.

With crime rates and unemployment figures astonishingly low, the United States is seemingly in good hands under the New Founding Fathers of America. It’s not these results that are worrying though, rather, that the country’s social achievements have come by way of a demonstrably violent method: the Purge. The Sandin family are amongst those who financially benefit from the twelve hour anything goes societal melee, father James (Ethan Hawke) having struck gold with his house security system. When his son Charlie (Max Burkholder) lets in a wounded Purge victim things start to go wrong; the latter’s pursuing attackers are led straight to the family home carrying spiteful demands.

The moral jousting embodied by Charlie is one that the film looks to delve into from the beginning, doing so with true intentions if not true conviction. The Sandin’s are a rich family who discuss carb intake at the dinner table and live in a lavish house that represents the prosperity of James’ sales pitches. Essentially, the Purge funds them. Individually they’re fairly affable folk, but collectively the Sandin’s aren’t exactly an authentic reflection of life. Instead, the quartet are like the gloss over a scratched surface. Even though the allotted night of crime has ushered in decreasing unemployment and a reduction in year round violence, the poor are still those who suffer when suffering occurs — take Charlie’s wounded invitee, for instance.

The ambiguity over whether or not we should root for, or even like, the Sandin family unfurls disorderly as the film progresses, but this initial notion of papering over the cracks stays rooted firmly within the narrative, indicating an inbuilt societal prerogative that is advantageous to wealth. In a way events displayed throughout The Purge are merely a continuation of the world today and DeMonaco — who also wrote the screenplay — tries to shill this allegorical pursuit, however is eventually overruled by a lack of vigour. The twisted morality emitted from our central family resonates with the trials and tribulations of Macon Blair’s Dwight in Blue Ruin. For both he and James Sandin, it boils down to an age-old dilemma: how far would you go to protect your family? Whereas Blue Ruin effectively portrayed a blunt and grisly reality, The Purge doesn’t quite have the same stark intensity. Although it simmers like a fine broth, the end product isn’t all that satisfying.

Yet, intrinsically linked to the moral juggling are the makings of a successful look at post-contemporary crime and violence. Proceedings have a familiar Hunger Games-esque tinge to them; one night of inhumanity for the apparent sake of all humanity. The idea of a 12-hour law-free zone is absolutely ridiculous, but there’s something perversely plausible about it. We listen along with wife Mary as news commentaries discuss the logistical need for the Purge, while “have a safe night” is common neighbourhood lingo. Disorder is the norm, at least for a brief period of time, a concept that the film profitably depicts as eerily recognisable. DeMonaco also adds creepiness though discomforting erudite imagery (upper class young adults unorthodoxly peering up at a peephole), given this is paraded as a horror film after all — though it’s far more confident in the thriller aspect. There’s also a relentless murmuring sound that carefully ratchets up the tension as events advance.

In the end, alongside a lack of should-be applicable harshness, the film succumbs to being far too unrealistic. The improbable main plot point isn’t an issue — we’re along for the ride from the get-go — however there’s an incredible influx of coincidence going on. For one, the attackers outside are undisturbed for a significant amount of time despite being exposed to the crime-ridden streets. Also, people just so happen to walk directly into the line of fire on a number of occasions. (Listen out for where daughter Zoe’s decides to hide.) “Things like this are not supposed to happen in our neighbourhood,” chimes one character who seemingly never received the bleak tonal memo, opting for cheap black humour instead.

Notwithstanding some shoddy dialogue, the performances are universally well-oiled. Lena Headey is the best of the bunch as wife Mary, never coming across as unlikeable despite playing a character who could have towed the swanky line. Headey even manages to channel the purposeful poise she heeds in Westeros. As her husband James, Ethan Hawke holds up his end of the bargain. His reliability does outbid any ingenuity, though in truth he’s not given an awful lot to work with other than convention. Adelaide Kane and Max Burkholder are engaging as the duo’s children Zoe and Max, and Rhys Wakefield does his best impression of a peculiar, skin-crawling villain.

The Purge is better than just cheap thrills and jumpy scare-tactics. Director James DeMonaco attempts to inject the increasingly fledgling horror genre with a degree of thought-provocation, and success up until a point. High in concept and high in potential value, this doesn’t quite muster up the strength to be high in quality, but it shouldn’t be shunned for trying.