Films are often categorised under the “escape” section of our everyday lives. We watch to disassociate with reality for short bursts of time, to be present only within the context of the tedious romcom playing out on screen. Or the spectacular science-fiction trek that hurtles us towards another planet. Or the not-so-scary slasher flick we’ve seen a hundred times yet whose economical frights we still get a kick out of. Every so often though, there’s a film that commands our attention and refrains from releasing its grasp even long after the credits have finished rolling. Woody Allen’s infectious romantic dramedy is that film. Presented in a simple-yet-effective manner, it’s the delivery of the piece that approaches astounding. Annie Hall truly is a hallmark of American cinema.

Alvy Singer (Woody Allen) is an ardent New Yorker with a panache for eccentricity and a motor mouth to back it up. He’s also a comedian who plays doubles tennis every so often, and it’s on one of these sporting jaunts that Alvy meets Annie Hall (Diane Keaton). The connection between the pair is palpable from the moment they first awkwardly converse.

This isn’t a complicated film. Sure, it gets caught up in a barrage of intellectually stimulated dialogues echoed by apparently complex characters but that’s wholeheartedly where the fun lies. And it really is fun. Alvy is an erratic guy who just about holds it together by way of his methodological consistency. He wants to know the who, what, where, when, and why about everything because this allows him to pick apart and challenge. (“Everything our parents said was good is bad: sun, milk, red meat, college.”) Maybe it’s the comedian in him, but one gets the sense that his mannerisms have been ingrained since childhood — Alvy alludes to the adolescent trauma enforced by the roller coaster that often rattled above his house.

On the other hand there’s Annie. Not quite carefree but certainly free-spirited, Annie is bubbly and bumbling. The chipper lass ain’t entirely sure of herself when we first meet, though she steadily gains resolve and direction alongside the spitfire that is Alvy. They’re quite different people and share a relationship that invariably teeters between effusive and choppy. She’s Los Angeles, he’s New York. Certainly, their premier interaction post-tennis match embodies the joyous authenticity of the couple. The scene is awkward and endearing and hilarious, and from then we can’t take our eyes off of pair’s dynamic nor remove our permanent smile induced as a result of their witty banter. The film is all about them, fortunately. In some ways we feel unduly cut short at 93 minutes, but in others the hour and a half feels like a perfect summation of director Woody Allen’s vision. For a film so focused on two people — it does flirt with a variety of issues, but hones in on their relationship — Alvy and Annie are perpetually watchable.

Aided by semi-prominent collaborator Marshall Brickman, Allen’s original screenplay ensures his characters’ long-term watchability is a certainty. It’s outstanding. The film is bookended by two Woody Allen (or Alvy, but we get the sense they’re the same person) monologues, both of which represent the writer — and actor and director — at his most prosperous. Endlessly quotable (“Joey Nichols. See? Nichols. See? Nichols!”) and unafraid to tackle a whole range of affairs from 70s New York culture to drug use to the US East/West divide, Allen and Brickman’s screenplay rightly bagged an Academy Award at the organisation’s semicentennial ceremony. The narrative never suffocates its characters; even on the odd occasion when an overly vague cultural reference escapes Allen’s cerebral pen, the film skips along unscathed, our viewing experience likewise resilient.

This might also be one of the filmmaker’s funniest outings. With light-hearted subtlety often capitalised on by Allen and his acting partner Diane Keaton, Annie Hall never stops short at provoking laughter. Whether it’s a character living up to expectations — in the case of psychiatric results, it’s two characters — or a swivel away from narrative convention, humour is always lying in wait and we’re eternally willing to guzzle. The latter of these two examples sees Alvy accuse a pompous cinemagoer of being too indulgent. Allen, in this instance himself a quasi-critic evaluating the pretentious kind, is also poking fun at himself and the plethora of ‘don’t sneeze or you’ll miss the point’ diatribes he has written into the film.

As previously alluded to, the piece is shot abiding by a mantra of simplicity that serves to position the spotlight on its characters and accentuate their presence. The camera lingers on conversations for a long period of time because it knows it’s peering into aural gold. Richard Linklater’s Before trilogy springs to mind, a romantic moment in time that shares many intricacies with Annie Hall and was undoubtedly influence by Allen’s effective candour. Periodically we do see a few neat tricks play out, such as Alvy and company breaking the third wall or random subtitles translating small-talk for real thoughts, but these aren’t just pithy inclusions. Rather, they serve a purpose, be that to inject amusement or make a specific point about life.

The performances from Diane Keaton and Woody Allen ought to speak for themselves, but it’s worth noting that they’re wonderful. Annie Hall plays out in a non-chronological fashion. We already know the ending because it’s also the beginning, but that doesn’t matter one jot. It’s the journey that counts, and this journey is one of the very best. 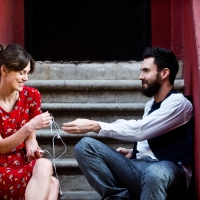