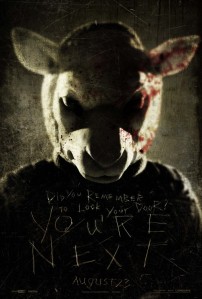 You’re Next is like a chocolate pizza: it’s propped up by two flavoursome ingredients, each one carrying a tenancy to be tasty without the other, but ultimately the hybrid doesn’t quite mesh together. And that’s not the only problem, given the pizza is also undercooked. Perhaps I ought to digress from food-related similes and start making sense. Adam Wingard takes scares and humour and crunches them together without unconditional success, in an attempt to make a witty horror film. He’s a smart director with a knack for the genre, which is why the creative funny parts work so well. But as he winks at us with satirical gags and rule bending, Wingard also slips in a helping of bewildered frights. The result is quite a confused outing, but it’s not without merit.

As far as family get-togethers go, the Davison clan aren’t having much luck. It’s mum and dad’s wedding anniversary therefore the whole crew have been invited over to celebrate. Erin (Sharni Vinson) tags along with her boyfriend Crispian (AJ Bowen), the latter hoping not to be outshined by his more successful kin this time. During dinner and an all too familiar serving of familial squabbling, a rouge arrow zips through the window. Chaos ensues. The Davisons are under attack.

Wingard casts his mate AJ Bowen in the main role opposite the fetching Aussie import Sharni Vinson. Bro points, eh? That’s unfair, because Bowen is actually fairly good at the personally insulted son and brother shtick, but it’s his in-movie partner who exits to the loudest ovation. Vinson is effortlessly charming and likeable, traits not always compatible with female leads in horror outings. Yet it’s her steely determination that convinces most of all; Vinson wears an air of intriguing mystique that coats her character in a bit more depth than is usually on display in these ventures. You’re Next isn’t just one of those ordinarily drab slasher flicks hell-bent on counting change over quality though. Captain Wingard is too canny for that.

The signs are plain to see from the get-go. Mother Aubrey Davison, on medication of course, exemplifies the OTT caricature of paranoia as she squeals and weeps her way through intruder anxiety. Others follow suit; from Joe Swanberg’s older brother Drake channelling his inner-Phil Dunphy (if the Modern Family keepsake was a douche), to the bubbly and seemingly spoilt Aimee played by Amy Seimetz. It’s the haunted house, the home invasion, the slasher. But it’s also the family dramedy wrapped in horror and, whilst the horror part flounders, Wingard’s amusing take on tribal bickering within a horror context truly succeeds. Erin epitomises the antithesis of both a drama-contained girlfriend and a scary movie chick. She’s the organiser, someone whose forward movements give her centre stage rather than a background stint. In way she’s us, shouting at every horror cliché there’s ever been. (Don’t go down to the basement, always carry a weapon, keep the windows boarded.) At one point Erin is informed, “I’ve never seen you act like this before”. “It’s a unique situation,” she replies, the interaction an indication of dissolving horror commonalities.

In some ways the film is a challenge to audiences, asking us to alter our perception and re-evaluate our willingness to accept and chew on genre staleness. A speech towards the end is a backhanded slap directed at those who gorge in genericism, who subsequently ignore the inventive pieces. Wingard has a palpable gripe. His first three films before this one — You’re Next is actually a 2011 piece — were all met with critical success, but aren’t at all well known. Home Sick? Pop Skull? A Horrible Way to Die? I’m certainly lost at sea. It’s time to rise from whatever rut we’re in and consider the hidden gems. Indeed, if they’re as perceptive as this ruby, Wingard has a point.

Unfortunately You’re Next falls flat on its morally-imbued face at times. It’s not scary yet it’s absolutely trying to be. The first attack scene around the dinner table wants desperately to be pulsating but ends up being too over-egged. We’re supposed to become enraptured in the immediacy of a horrifying ambush at home — shaky cam in full flow, drumming music beating emphatically, screams piercing — but it’s all too obvious. Comedy horror can work. An American Werewolf in London, for example, is as humorous as it is nerve-jangling. Here, exists a convolution of aim and execution. Wingard’s aim is valiant and he executes it with fifty percent triumph. The other half, the horror, is out of place. A case of the ‘quiet, quiet, quiet… BANG’ syndrome frequents proceedings. As characters are mercilessly slain we’re left in a state of flux: is this part of the satire, or a genuine attempt to frighten? Apparently the latter.

Having said that, the scare attempts do inevitably shower us with some moments of hearty gruesomeness. The film strikes as being a relative of Berberian Sound Studio, its audio effects as squelchy and excessive as they come. At some points the actors are quite literally swimming in pools of tomato-ey blood and guts. Throat slicing takes prominence, letting the soon-to-be deceased discover a cruel twist of fate in their final moment. It’s likely that the filmmakers are making a point about exorbitant amounts of red unfairly equating to disproportionate amounts of green. (That’s cash, as opposed to hash).

You’re Next fails to scare us because it leads us to believe that conventional horror simply isn’t scary. It’s a shame then that this falls on the conventional side of things when it’s not being astutely satirical. But Adam Wingard does a lot right and, even though his film mixes an incompatible broth too much, too often, it’s intelligent enough to warrant serious consideration. Who knows, this might even be the inaugural step in a new, smarter horror movement.