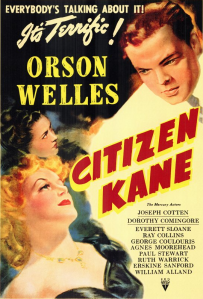 Since the release of Orson Welles’ Citizen Kane all the way back in 1941, that term has been analysed and re-analysed. It has been torn apart and put back together again. It has been evaluated in reference to each individual scene in the film, regardless of significance. Rosebud, the word proclaimed by Kane at the very beginning of the movie and the very end of his life, has become something of a symbol of mystery and intrigue in the film industry throughout the 70-plus years since its first uttering. Orson Welles, by way of a single word articulated from the mouth of one of his characters amid his first feature film as a director, has helped revolutionise filmmaking and storytelling. Citizen Kane is a sublime piece of work, a masterpiece, driven by a simple phrase that encompasses so much, yet means very little at all.

Citizen Kane retells the life, career and legacy of wealthy newspaper magnate Charles Foster Kane (Orson Welles), doing so through a combination of flashbacks recounting significant events, along with divulging tales from those who knew him, told in the present. Shortly after the death of Kane, it becomes the utmost priority of newsreel reporter Jerry Thompson to find out the meaning behind the influential man’s last word in the hope that he will learn something subtle-yet-meaningful about the extraordinary life lived by Kane.

There is not much to be said about Citizen Kane that has not already been said, and said far more eloquently than anything which is about to be written by myself. From the innovative cinematography delivered by Gregg Toland, to the trend-setting diversion from linear storytelling by director Orson Welles, to the array of impeccably delivered performances at the hands of the main cast members and all those in between, Citizen Kane truly is the Mona Lisa of cinema. The film works on every level, be it as a narrative about unknowingly losing grasp of innocence, or a compelling drama about finding out the significance of a single phrase. Welles is as much a stalwart behind the camera as he is in-front, achieving as close to perfection in both fields as cinematic history has to offer.

At the centre of events is the curious and mysterious word uttered by Kane at the very cusp of his existence: Rosebud. Just as soon as the snow globe exits Kane’s ailing grasp and the echoes of his secretive phrase have finished, news reporters around the world set their sights on becoming the first to uncover the true meaning behind Kane’s life, and in turn, Kane himself. “It is not enough to tell us what a man did. You have to tell us who a man was,” says one newspaper editor. The bustling nature of proceedings is in full flow, as smoky rooms concealing the faces of such media-men play host to many a conversation about who, where and how the true meaning behind Rosebud will be discovered. From the get-go this highlights the importance of Charles Forster Kane and the impact the newspaper magnate had on society — the period 1895 to 1941 is described in reference to Kane: “All of these years he covered, many of these he was.”

Shortly afterwards sees the introduction of the non-linear aspect of the film, as flashbacks stretching as far back as Kane’s early years begin. His childhood is primarily spent in a cold, wealth-deprived area of Colorado, where Kane is upbeat as a youngster and enjoys sledging in the snow. The positive attitude he boasts is maintained throughout his early adult years as Kane defies the wishes of his business-driven guardian Mr Thatcher and chooses a “fun” career in the newspaper industry rather than a money-focused empirical reign. It is clear that Charles Foster Kane is a beacon of intuition and enthusiasm in his younger years, with Orson Welles oozing confidence, intelligence and initiative as the title character. The quick-witted performance adopted by Welles is perfect for Kane, who maintains his perceptiveness as his life thunders on.

It is this innocence that Kane evokes as a child, and even to an extent as a youthful business entrepreneur, that plays a key role in the underlying Rosebud saga. As the newspaper magnate’s existence wears on, his ideas become more and more exuberant (turning an average singer into a stage star) and his relationships increasingly flail (entailing both his family and friends). His life is consumed by the news, both internally and externally, and the once composed, progressive entrepreneur begins to evolve into the brash and bold character that the opening title credits suggest. Kane never dreamt of money, only to be loved, as attested to by his closest friend. Perhaps this is a direct result of his relocation away from his parents as a child. When the love and admiration dwindles, so too does Kane’s predicament. Again, Welles is magnificent as he unveils a completely contradictory side of Charles Foster Kane to that seen at the beginning of the film. Only at the very conclusion does the implication of Rosebud take hold, as Citizen Kane comes full circle in telling the story of a once happy individual whose security has become overwrought with pressure and who seeks one final glimpse at what he once had.

Orson Welles embodies Charles Foster Kane like nobody else could, and delivers two impeccable performances (or three, if you count his role as director). Not only is Welles focused and driven as the lead, he is also very funny on occasion, which is in no small part down to the quick-witted nature of the character and performance. Alongside Welles, the likes of Joseph Cotton and Everett Sloane stand out as Kane’s best friend Jedediah Leland and loyal employee Mr. Bernstein, respectively. Dorothy Comingore gives a bubbly performance as Kane’s second wife and aspiring opera star Susan. Another outstanding contribution nod must go the way of cinematographer Gregg Toland, whose innovative camera work allows the audience to see what they themselves want to see, and whose inventive techniques back in 1941 have helped to pave the way for modern filmmaking as it is prescribed today.

At one point during the film Kane says, “I don’t think there’s one word that can describe a man’s life”. In essence, this is true. Although the driving force behind Citizen Kane is the grand search to discover what Rosebud means, the true story of the film is simply in retelling the incredible life of a man subconsciously pursuing that what he once had a long time ago.