Hot on the heels of their inverted slasher jaunt You’re Next, director Adam Wingard and writer Simon Barrett are back with another bold outing. The Guest moves along purposefully, fuelled by a pulpy beat that adds to its wholesale allure. In some ways it’s one of those that is difficult to consume in a single sitting — there are so many astutely placed kinks to pick out and admire.

Yet, the story is simple. A generally agreeable tale that would undoubtedly flounder in lesser hands. Wingard and Barrett are too committed to let matters evade them and The Guest thrives as a result.

As she opens the door to a stranger whom we later come to know as David (Dan Stevens), mother Laura Peterson (Sheila Kelly) is still wiping from her face the fresh and presumably frequent tears brought on by the thought of her son’s death in Afghanistan. David claims to be the deceased soldier’s squad mate, having stopped by in order to uphold a promise and offer his condolences. His presence immediately fills a gap and the popular David finds himself around for the long haul. Only, something about the visitor doesn’t sit correctly with daughter Anna (Maika Munroe).

It’s obvious that the director cherishes each and every frame afforded to him as the screen is relentlessly tinged with meaning and inquisition. We’re gripped from the get-go, unable to shake of the taut dinner table ambience or Dan Stevens’ malice-sprinkled gaze. The Guest isn’t a conventional thriller because it doesn’t rely on snappy movements or authoritative language. There is a lot of weapon speech (“I’m a soldier, man. I like guns,” David reassures us) but the tension here lies almost universally upon the brow of the lead actor.

The Downton Abbey star is far from lord-like on this occasion, though Stevens does retain a resolute posture, unmoved and unflinching. When we first meet him he manifests as a fairly ordinary guy, a former soldier about to make his way back into society. A peculiar glance is at first distracting, and then nerve-jangling. Stevens gives off an impression of suppressed power; his character is always in control and, to make matters worse, the Stevenson family are completely unaware. They are caught in a charisma spell. So are we.

Frankly, the actor is brilliant, his simple delivery layered with complex volume and mysterious motives. It’s almost as if Barrett penned the character with Stevens in mind. Superseding said performance is the actor’s ability to consistently engage the viewer, to make us like him even though we are unequivocally aware that the chap before us is a dodgy guy. His iffiness pours from every crevice and, somehow, we cannot help but egg David on. This element centres the film and effectively pulls the various pieces together. Part thriller, part mystery, part character study, an immediate need to like David infects proceedings with a darkly comedic underbelly.

It’s dark. It’s devious. It’s horrible. And it’s bloody delightful. As Robby Baumgartner focuses his camera on David, carefully edging closer into his nasty glare, we become the devil on the wanderer’s shoulder and indulge in helpings of fun as a result. Wingard knows he is appeasing the genre audience every step of the way. The director has history, rewriting the pillars of horror to accommodate something different in You’re Next, and this mantra is once again capitalised upon here.

The other performances are somewhat overshadowed by the excellence of the lead actor, but it is worth singling out newcomer Maika Munroe’s work as the entranced-cum-anxious daughter. Anna could very easily have stumbled over into annoying territory, but Munroe just about reigns in the mood swings and does enough positive rallying to see her through unscathed. Sheila Kelly’s performance as devastated mother Laura is also commendable. We believe in her plight to keep David around, though misguided due to the loss of her son, and we can therefore sympathise rather than judge. In between moments of ill-advised glee, we ultimately care about the family.

The sheer abundance of solid work done beforehand enables us to forgive the overly ironic haunted maze finale, and instead pass it off as a humorously cheesy side order. Everything else is so good. If such an anomaly exists in our ever diverging cinematic universe, The Guest is intelligent popcorn entertainment. And if such an anomaly exists, Adam Wingard might be on his way to mastering it. 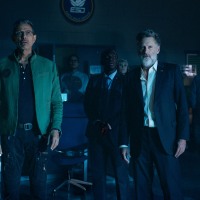