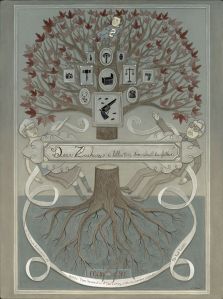 How does one review a terribly sad personal visual tribute? It’s somewhat ironic that Kurt Kuenne’s diary of tragedy is such a labour of love, the filmmaker having traversed across the United States, Canada and even the United Kingdom to create his piece. But perhaps the irony is misplaced. Undoubtedly, Dear Zachary is profusely powerful and heart-wrenching, but it’s also a story about living. About loving.

Kuenne’s efforts are splashed across every frame (and every videotape stashed inside a box in the back of his vehicle) and it’s apt that by injecting so much passion Kuenne receives even more in return. The man at the centre of events is Andrew Bagby, the director’s dear friend and a victim of inhumanity, but someone who seemingly revelled in quite the opposite.

In early November 2001, Andrew Bagby was murdered. A medical student from California, the reach of his inherent popularity is made evident through the filmmaker’s interviews with a whole host of friends, family and colleagues. We’re informed that the collection of life recollections are for Zachary, Andrew’s unborn son at the time of his death.

There’s no real urgency to critique this film. Nor, truthfully, is there a need. But in a pithily vain attempt, here goes anyway. Technically, it serves a purpose: to clearly and concisely recount a story. We’re plunged into a moment in time, information about the person and subsequent criminal investigation gallivanting left and right. It’s difficult to chew on all of the data first time around which is why Kuenne navigates a narrative roundabout once or twice. The thing is, what we’re learning about is not simply narrative. It’s real life, and that’s why critically assessing events feels a tad unwarranted.

We’re taken completely aback because the story is shocking. We’re overcome by emotion because the account is upsetting. We’re rendered unequivocally resentful because the tragedy is unjust. Kuenne’s direction (in fact his everything: he’s also editor, cinematographer, writer and more) is deft; though we’ve a lot to consume, the presentation is done in such a way that we’re willing to engage and become attached to those on screen. We enter familial homes either side of the Atlantic and feel totally welcome, as if individually invited into them for a brief period of time. While the content is personal, the way in which it’s displayed is personable and therefore, at just over an hour and a half, proceedings seem to fly by.

Rumbling like a pitch black storm cloud alongside both the hearty family memoirs and some joyous and often amusing archive footage that shows Andrew’s attempts at acting for his best friend’s home-made short films, is the harrowing topic of Andrew’s untimely death. Though it feels rather flippant to discuss such a tragedy using obsolete language, this part of the documentary plays out like a fictitious crime-drama. It’s unbelievable. As the minutes tick away each discomforting revelation trumps the one preceding until the film reaches breaking point. If you watch the outing armed with prior knowledge of events, hearing them being discussed by Andrew’s loved ones will undoubtedly be disconcerting. Viewing Dear Zachary without any previous awareness of the subject though, is truly distressing. There’s no hiding that. This is a tough ninety minutes.

Criticising Kurt Kuenne’s intimate gift is not something on the agenda, nor should it be. Having said that, it’d be disingenuous not to point out a specific section that might sit uneasily with some. (As it does with me.) There is one moment that doesn’t altogether mesh well with what surrounds it, given how lovingly the remainder of the film is relayed. A particularly brash montage showing certain images and bolstered by grunge-like music is quite confrontational. Though, perhaps it should be. And there’s no arguing against the fact that its inclusion is absolutely with the filmmaker’s best intentions. Indeed, on the contrary, it represents the contextual horrors aptly.

As the film proceeds, it becomes drastically obvious just how wide Andrew’s web of affection had — and still does — stretch. From his parents, to a former fiancée, to English cousins, to criminal lawyers, a great number of people offer their own universally earnest and affectionate experiences shared with the medical student. The interviews, naturally, have a two-fold effect. In one of the film’s most chilling moments, Andrew’s justifiably distraught father explodes in a fit of sheer loathing and it is in this action, more than any, that we get a stark sense of just how much the tragedy and all resultant enquiries have affected those close to him.

You can’t put a price on a family heirloom and, in essence, Dear Zachary is a preemptive visual legacy. Thus assigning stars almost seems unnecessary. The film is rate-less. It’s Andrew Bagby’s story told by one of his closest friends, and it’s a troublesome watch. Hopefully, rightfully, the positive aspects prevail.