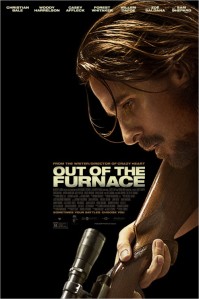 Scott Cooper’s film tells the story of two brothers left short-handed by the frankness of life, but more specifically it’s a look into the psyche of one sibling, Christian Bale’s Russell, emotionally shot and physically trapped. Out of the Furnace itself received a rough ride upon release. The cast, wasted, supersede the inefficiently constructed narrative, seemed to be the most common argument. It’s too slow, too poorly paced. Quite the opposite. The film is marvellously paced and the narrative is steeped in authentic poignancy. Sure the screenplay would benefit from a dose of balance, but Out of the Furnace is not a missed opportunity. It’s a really, really good piece of cinema.

A heart-on-sleeve type of guy, Russell Baze (Christian Bale) works three jobs. Aside from earning a meagre living at the nearby mill — the same one that has rendered his father incapacitated — Russell cares for his ailing dad whilst also attempting to keep his younger brother’s mind straight. Rodney is a solider whose deployments to Iraq are as scattered as the head on his shoulders. The brothers just about get by, but their lives are quickly shattered when a horrific accident suddenly opens demon-infested floodgates.

Realism seeps into every frame, every projected wooden crevice. We’re slap-bang in the centre of a hereditary coal and steel town, North Braddock, Pennsylvania and the camera rams this home. A huge factory is often shown looming in the background, the greyish smoke pillowing skyward a constant reminder of toxicity and waste. It hosts the eponymous furnace and endeavours to promote the air of struggle of its nearby citizens, but also their honest willingness to work. Already we’re drawn to Russell who embodies this mentality, a grafter by trade. Masanobu Takayanagi’s cinematography is musky — you’d be forgiven for any eye-rubbing to remove dust — and perfectly captures the mood of the town; filled with hard labourers and harder folk. It screams ‘get me out of here’.

Russell is a hearty soul, a trait that beams as he interacts with those close to him. Lena is his girlfriend at the beginning and their playfulness is infectious. Uncle Gerald, or ‘Red’, is another whom we watch engage positively with Russell. But it’s the latter’s relationship with his wayward brother Rodney that’s most genuine. They share an at times awkward yet always nurturing bond, one that is believable partly due to how Bale and Casey Affleck play it, but we’re also convinced by the harshness of reality and their subsequent eternal earnestness as a duo. Not much is going according to plan but these two remain decent guys with admirable qualities who are not impervious to the odd mistake. (Some mistakes very serious — Scott Cooper doesn’t shirk away from complexity).

Existing subserviently in manner but not meaning to this sibling relationships is Russell’s own personal battle with day-to-day existence. He’s mentally more mature than his brother; at one point it’s suggested that Rodney “might be safer over in Iraq” than wandering the chalky streets of North Braddock. The screenplay simmers patiently, as does Cooper’s precise direction, allowing us to connect with Russell and his unluckiness. But even as pillar after pillar collapses in the manual worker’s life, we’re afforded the chance to acknowledge the sincerity of each problem because they’re all completely applicable within the prevailing context.

In Russell, Cooper revives the teetering tragedy of Crazy Heart’s Otis Blake. In some ways the two mirror each other: in their jobs, slaving away without much financial reward; in their protectiveness, one for a son he never had and one for a brother he fears losing; in their mentality, both close to defeat yet deeply defiant and inspired by externalities. Out of the Furnace is the director’s second character study of two and is equally as effective as the first. The camera likes to linger on glances and facial expressions — not Russell’s exclusively — and so we’re able to feed off of each characters’ strained thoughts and the cast’s wholesome portrayals.

Christian Bale does for Casey Affleck here what Mark Wahlberg done for Bale in The Fighter. He underplays the performance, clearing room for Affleck’s hysterics. These range from anxiously proud to uncomfortably harrowing, but are consistently sterling. Bale’s is certainly the toughest role because restraint is absolutely key. He nails it. However, as Rodney, Affleck is stand out performer. Which is some feat considering the truly excellent efforts relayed by the remaining cast members. Woody Harrelson appears as Harlan DeGroat, an invasive and psychotic drug dealer whom Rodney owns money to. Harrelson’s recruitment is a great choice, his character a real baddie. A grizzled, rugged no good son of a bitch. Zoe Saldana, Forest Whitaker and Willem Dafoe complete the star-studded selection and the trio each donate valid performances.

If there is a fault to be picked and presented, it’s the unfortunate imbalance in narrative. The runtime is fine at almost two hours, but over half of that is enlisted as set up leaving only around 50 minutes for retaliation. The problem is not catastrophic — it likely would be in lesser hands — but it does dent an otherwise foolproof outing, incurring unevenness as opposed to equity. In an attempt to disguise the issue, we’re subject to interplayed cuts between scenes that actually do end up harmonising well together.

Out of the Furnace is another winning film from Scott Cooper. It’s worth pointing out the effective soundtrack that shifts between a Western twang and a mellow ambience, and one that is capped off by Pearl Jam’s Release. For that’s what the piece is all about, release. A very sombre picture with sporadic healing tendencies — though not enough — it is the recognisable mundaneness that really hits home.