Kids are taking over the world. Well, the worlds of pop culture and weighty entertainment. If it’s not a bunch of Spielbergian curiousos charming viewers eight times over in Stranger Things, it’s Jacob Tremblay comfortably matching his demonstrably more experienced counterparts with a powerhouse performance in Room. Today Sennia Nanua joins the not-so-Mickey-Mouse-Club, her turn as a next generation zombie-human in The Girl with All the Gifts at once endearing and domineering. And even a little amusing. That’s quite the trifecta.

Colm McCarthy brings M.R. Carey’s (credited as Mike Carey) mid-apocalyptic world to the silver screen, a world severely stunted by some sort of biological doomsday. Carey’s novel of the same name garnered much praise, which, when coupled alongside his extensive comic book writing portfolio, suggests he is doing something right. The penman may yet want to consider a screenwriting career if this is his default standard. He presents Melanie (Sennia Nanua), a child with fleshy cravings and the ability to interact as normal. When we first meet her she is hidden away in some sort of military base with many of her kind — her ‘classmates’ — and a selection of adult soldiers, scientists, and teachers. It’s not initially clear what the purpose of the locale is: a zone of Freudian experimentation usurping social and ethical norms, or a shelter from the horrors outside?

We quickly learn it is a bit of both, though the striking image of children wearing orange jumpsuits and strapped to wheelchairs feeds the former narrative (these sequences are probably not unintentionally dissimilar in a visual sense to familiar scenes in A Clockwork Orange). That it soon becomes clear said treatment is decidedly less harsh than what is going on elsewhere ought to give you an indication of the type of material we are dealing with. I hesitate to reveal more of the initial plot; not because doing so would spoil the film but because piecing together the early moral dilemmas as they play out on-screen is both a challenging and rewarding experience. Needless to say the setting soon changes and The Girl with All the Gifts transforms into a Monsters-esque road trip.

But back to Melanie, the film’s central presence. She is essentially a blank slate, or a dry sponge for lack of a better description, in that she desires knowledge as well as body parts and absorbs information with incredible endurance. Her favourite teacher is Helen Justineau (Gemma Arterton), a sort of Miss Honey figure who brightens up their bleak bunker home inhabited otherwise by those who refer to the children as “abortions” and treat them with contempt bred, perhaps understandably, from wariness. This attitude prevails throughout the film to varying degrees, some characters afraid but sympathetic, others driven solely by the scientific possibilities the zom-kids present. Dr. Caroline Caldwell (Glenn Close) is one of the latter, a medical professional who sees Melanie not as a human being but as a resource and a pathway to a potential cure. “They present as children, you know my opinion on that,” she insists. Emphasis on “present”.

Close excels as a pseudo-antagonist, stirring intentions born out of necessity rather than anything particularly sinister. Caldwell only dons the antagonist role because Carey’s writing characterises Melanie not as a resource but as an innocent child, his characterisation authenticated by Nanua’s poise. We feel compelled to side with Melanie because we can relate to her kindness and her appearance. Caldwell feels compelled to do her duty as a scientist in an endangered world running out of scientific solutions, which isn’t evil per se. Whenever zombies are involved comparisons with The Walking Dead are inevitable, but whereas that show has adopted a broadly romanticised us-versus-them approach, this feels more arduous, moral implications blurrier. It’s interesting precisely because there is no clear answer.

This world has seen the worst and now exists in a state of post-shock where terror no longer marinates. Now is the time for practicality, a mindset embodied by Caldwell: without hesitation she investigates the contents of a pram being pushed by a ‘hungry’ — an actual zombie, brainless — not put off by danger but rather spurred on by “gathering data, which is part of [her] mission statement”. Justineau, meanwhile, is clearly more concerned about the welfare of Melanie than her own, apparently consigned to whatever fate lies ahead. Arterton has the emotional burden to carry, her frequently exhausted expression not a consequence of physical exertion (she is more than capable in the field) but of her problematic attachment to Melanie.

The piece hits some of the usual genre beats but does so with enough quality to sustain a level of intrigue. We’ve witnessed the basic premise play out in films such as 28 Days Later and World War Z and, just like in those films, military personnel have a hand in proceedings here. What separates The Girl with All the Gifts from the pack, though, is its almost subliminal tone of humour. It’s an understated lightheartedness that feels genuine in a broken society already acclimatised to its brokenness. At one point Melanie, having just fed on some animals, blood tattooed onto her face, jovially reveals she is no longer hungry and the others can only look on in a collective state of horrified discombobulation. Paddy Considine’s Sgt. Eddie Parks benefits most from the humorous touch, able to escape an incoming hard-man caricature and develop into a rounded figure.

For those seeking the usual zombie fare, The Girl with All the Gifts has you covered. It’s as bloody and gory and gnarly as it is thought-provoking. Cristobal Tapia de Veer’s score spans the mood spectrum, incurring a feeling of discomfort with invasive brass entries. I was reminded of Shutter Island’s brooding soundtrack. With air raid sirens fulfilling the threat-based requirements, the sounds of trees swishing harmoniously and birds gently humming reflect the film’s thoughtful mantra. Nature, too, is character, sparse streets having been attacked by overgrown greenery, turning South East England into Pripyat, Ukraine. McCarthy’s film makes brilliant use of its £4 million production budget, and is well worth the price of admission. 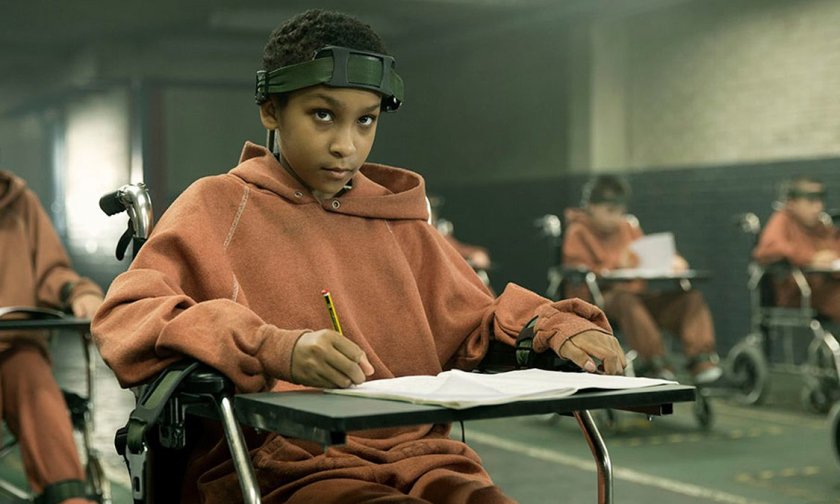 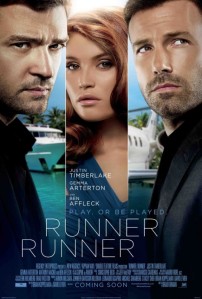 At some point near the beginning of Runner Runner, Justin Timberlake’s snappy student Richie Furst says, “Make no mistake, if you’re betting something, you’re gambling”. In this solitary sentence the character sums up the film within which he aimlessly meanders. It’s such a throwaway line, one that is so obvious it becomes irrelevant. Much like the whole of Brad Furman’s utterly conventional outing. But more than that, the words resonate with truth. Runner Runner isn’t betting on anything other than the knowledge that its audience is well-versed in poker lingo. There is no gambling going on here, only playing it safe. And safety is really boring.

Having blown his big break in Wall Street, Richie Furst (Justin Timberlake) is now ploughing his way through college. Unable to afford the master’s jump, Richie gambles all of his savings in a game of online poker and comes up short. Though, it turns out he’s been conned by Ivan Block (Ben Affleck), a rich business tycoon whom Richie endeavours to tell off in Costa Rica.

For a film centred on gambling — a concept pillared by unpredictability — Runner Runner is endlessly predictable. It relies on cheap normalities more often than not, and subsequently fails to sizzle in any way. Proceedings kick-off with yet another montage comprised of news reports, an introductory method that is becoming increasingly common in contemporary cinema. It’s too easy. Writing partners Brian Koppelman and David Levien contribute a screenplay bereft of originality and stained by familiarity; we watch the typical story of a guy with a gift (this time it’s intellect) who decides to throw everything away by dabbling in unethical stuff. Where does this bustling need to be edgy come from? A troubled parent of course (this time it’s the father), a dad who lived beyond his means and not with his son’s best interests at heart.

We struggle to engage with the film then, primarily due to the trampled road down which it blindly ventures, and behind many better pieces that have gone before. Timberlake himself has starred in a more focused slick-fest, The Social Network, a flick that Runner Runner seemingly aspires to be. That film had Aaron Sorkin’s witty script and David Fincher’s scintillating direction, whereas this would claw at the chance to boast half of the aforementioned duo’s inventiveness. Unless we’re quoting lines to demonstrate an incessantly plodding nature, the dialogue is severely unmemorable. It is a shame too, for a more enterprising approach might have made this a sleek addition to The Social Network or even Ocean’s Eleven brand. Yet, it’s not even on 21’s table.

And it is not as if the filmmakers aren’t trying to add a stand-out quality, they just frequently miss the mark. Richie wanders into a nightclub fairly early on where there is an obvious attempt to infuse events with style. Camera glued to the travelling student, an array of luminous colours give way to a myriad of energetic tunes. What should be glossy instead feels forced and unnatural. The moment is too music video-esque. In fact the whole presentation is laced with this sense of unimportance — chopping a few scenes wouldn’t make any difference. Nor would the addition of Kanye West miming lyrics to his new song.

When we’re not being bogged down by uneventful narrative, we’re still challenged to fend off relentless onslaughts of casino lingo. The entire opening poker scene is a verbal tennis match, Timberlake constantly serving to our body with language that is either too difficult to grasp or too boring to care about. Furman and company revel in the speech. As do their characters, who collectively spend large periods of time explaining the plot and, in doing so, don’t really condone gambling. Just the illegal side of it. Betting is an inherently negatively regarded activity, which presents a problem in so much as there is a resultant air of deceit that surrounds all of the characters from the start.

Ben Affleck is the one who phones it in most often. And who can blame him? Post-Argo, and probably still basking in that rich, dense frame of mind during filming, it is no wonder that he gives off the impression of someone memorising and then robotically regurgitating lines. He plays Ivan Block. Block calls his boat ‘The House’ because “the house always wins”. He’s a millionaire. Even the imperiously charismatic Justin Timberlake’s attempts to overcome the dreary script are unfounded. His character is a bit rubbish too — Richie is so desperate to gain a master’s degree that he gambles away all of his tuition money and then leaves college forever. When the filmmakers remember she is on the payroll, Gemma Arterton appears. Like the others she’s much better than the stinker of a role afforded to her, but Arterton does make an effort and is quite amiable.

Runner Runner is an intuition vacuum. By the time any shallow complexities begin we’ve been too dazed by convention and a superfluous insistence on casino-tongue to figure anything out. It’s not necessarily a badly made film, or even a bad film at all. It’s just really dull.