If you have a particular preference for buddy cop movies set in 1960s Eastern Europe (technically it is Western Europe but the prevailing Cold War atmosphere favours the former) starring a Brit playing an American, an American playing a Russian and Swede playing a German, The Man from U.N.C.L.E. is absolutely your kind of film. For those whose tastes spread more generally, Guy Ritchie’s latest adaptation is still an enjoyable and, for the most part, enticing action flick.

The director’s trademark style is plain to see — though in no way plain — from the beginning. We are introduced almost immediately to Henry Cavill’s Napoleon Solo, an exceedingly well kept CIA agent whose mission takes him to East Berlin where he must track down mechanic Gaby Teller (Alicia Vikander). KGB handyman Illya Kuryakin (Armie Hammer) is also after Teller, whose family has ties to a complicated plot involving Nazi experimentation and nuclear weaponry.

An opening duel between the opposing operatives lights the fuse on a two hour game of one-upmanship. It’s almost comic book-ish, with kinetic pans across bleak urban locales and camera zooms in towards an extended car chase providing much verve. This early sequence in particular harkens back to Ritchie’s Sherlock Holmes series, the dark and shadowy inflections of Victorian London incorporated again here, reflecting our two protagonists’ use of stealth and smarts as they attempt to gain the upper hand (shades of grey and black diagonally segment Solo’s face in scrumptious Hitchcockian fashion). The rest of the movie is mostly bright, its colour palette part of the confident — arrogant, even — bulbous energy.

Solo is no Han, though he and Teller do share a smidgen of Han and Leia’ feistiness (none of the romance). The agent exudes sarcasm and is a smarmy git, but Cavill’s cool swagger draws our affection; at one point Solo, in the midst of passing out, perfectly positions a few pillows beneath his head. The characterisation isn’t always this strong — Vikander’s seemingly distant chess piece stumbles through a faltering arc during which her actions are never really vindicated. The most egregiousness part is Teller and Kuryakin’s will-they-won’t-they relationship which feels too blasé for a film that is trying to be clever and slick.

There is a confident flow to proceedings when the two male leads are bantering back and forth. They are spies by trade but also convince as fashionistas, socialites and passive fiancés (well, sort of). Aside from the excellent opening, a team-up mission that both men wish to keep a secret is the film’s most entertaining occasion. It’s like an affair that neither operative wants to go public, and you buy into the individually-driven egotism each man displays.

Both actors assume their roles — Cavill as the upmarket Bond, Hammer as the brutish Bourne — with ease, a notion perhaps best embodied by a gadget-off at the beginning of said mission that sees Solo’s technical prowess out-muscled by Kuryakin’s straight-to-the-point mantra. The entire heist is a fine experiment in combative wit and told-you-so derision.

At one point we see then-President John F. Kennedy within the confines of a television screen, a reminder that events are unfolding in a paranoid and antagonistic setting. Ritchie needed to inject more of this uneasy tone, and should’ve taken a page out of The Winter Soldier’s book in doing so. It should be noted that John Mathieson’s crisp cinematography does evoke an effective era look, richly textured and striking in delivery.

But as snazzy a period piece as it is, the movie shares the same unfortunate lack of interest in exploring the suspicious undercurrents of its period as Mission: Impossible — Rogue Nation. We only really get broad East versus West strokes. The violence is kept to a minimum, which hampers any prevailing danger — greater bite would have upped the ante. It doesn’t have to be Fury, but an additional layer of grit would’ve assisted in shifting the characters from comic sketches to real-ish people.

There is an awful lot of exposition laced throughout too — the film disguises this information overload by getting most of it out the way in a snappy manner, zipping through newspaper clippings and newsreels during action lulls. “Whoever has that disk will simply be the most powerful nation in the world,” one character informs us before reaching through the screen and administering a collective elbow nudge to the audience.

The plot is quite messy. A plethora of agents, spies and turncoats are all invoked though many arrive without a sufficient backstory, or with a rushed one at best. Take the Vinciguerras for example, a villainous power couple who only seem to radiate villainy because they happen to be a power couple. As such it becomes increasingly difficult not only to engage with whichever talking head is around, but also to follow the intricacies of who is motivated to do what and why.

Hugh Grant shows up every now and again as Waverly (because he’s British — he even mutters the line, “Yes please. Thank you very much,” to compound the polite British stereotype). But Grant is so poised and brilliant in the role that it works. He’s a scene-stealer, possibly the best aspect of the movie. Now there’s at least one man from U.N.C.L.E. who deserves a sequel. 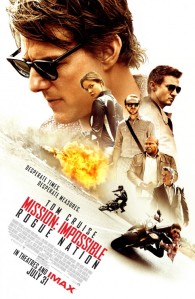 The Mission: Impossible films, in general, are good because the franchise knows exactly what it wants to be, and subsequently what it is. Rogue Nation, which once again pairs Tom Cruise with his Jack Reacher director Christopher McQuarrie, understands its place in the action-thriller lexicon just as well as its four predecessors. The film opens with an exhilarating sequence familiar to those who have seen the trailer: IMF agent Ethan Hunt attempting to clamber inside a gigantic cargo plane as it takes off.

When he eventually boards, the spy-cum-trapeze artist aims a sly shrug at the camera and a shocked bad guy, before parachuting out of the plane with tonnes of nerve gas in tow. The moment reaffirms Cruise’s insanity whilst also ushering in an infectious tongue-in-cheek vibe that thrives indefinitely. “I’ve heard stories, they can’t all be true,” says an Impossible Missions Force operative to Hunt in the calmer scene that follows. They’re definitely all true.

This story centres on the IMF’s unauthorised motion to take down a terrorist organisation reeking global havoc, known as the Syndicate. It’s righteousness versus evil. Mission: Impossible knows it isn’t as gritty as Bourne or as intelligent as Bond, and Rogue Nation’s high-concept plot somewhat reflects that. McQuarrie’s movie is not in any way mindless though — quite the opposite. It purveys a frothy exuberance that relentlessly breathes life into the screenplay and a coyness reflected in said screenplay’s playful genre jabs.

The film constantly pokes fun at itself, reaching out and nudging viewers amid all of the high intensity nonsense and popcorn silliness. “Nessun Dorma” chimes out as Hunt and a big baddie perform combat acrobatics on a lighting rig above an opera performance. The higher the note, the more absurd it gets. But it’s entertaining, one of a few tremendous action set pieces. An underwater spectacle conveys the same technical merit as Gravity and is probably the best of the bunch, highlighting some really intuitive camera work from Robert Elswit — his shots manoeuvre with the stunts and become part of the slick show. We shouldn’t be surprised given his portfolio (There Will Be Blood, Nightcrawler), and here Elswit introduces a cheery energy that those films didn’t have.

At one point Hunt ponders the location of a MacGuffin. Morocco apparently. Cue Lalo Schifrin’s mischievous theme and an ironic Cruise smile (not another sunny location!). He and Simon Pegg are fun to watch as odd buddies whose friendship you genuinely buy into. They meet up with Rebecca Ferguson’s Ilsa Faust who, in an earlier scene, promptly turns Hunt’s condescending, “You should go before it gets ugly,” into something more appreciative (she rescues him by beating up a ragtag band of tough guys as he struggles to unlock his handcuffs). The character is a super addition and Ferguson nails it. She is tough like Emily Blunt in Edge of Tomorrow, but a great deal more emotionally receptive than Rita Vrataski.

Back to Morocco, where Faust outlines a seemingly impossible mission. Wink, wink. Her five minute spiel detailing the most difficult heist in history is delivered with such credible nonchalance that we actually believe the group can pull it off. They do. The conclusion of said heist signals a lengthy stretch during which the film loses steam. Like many overexuberant blockbusters, at almost two and a half hours Rogue Nation is too long, which means we get unnecessary gap-filling acts where characters speed around in fast vehicles with very little at stake.

McQuarrie tries to inject ambiguity into an otherwise conventional narrative by contemplating the trust-related pitfalls faced by agents (“There are no allies in statecraft, only common interests”). A fleeting Cold War-esque paranoia infects the air and sort of muddies various characters’ credibility. The aforementioned opera scene includes a three way shootout embodying this uncertainty. Is Faust a double, or triple, agent? Is Jeremy Renner’s — whose brilliantly snarky performance warrants much more screen time — William Brandt secretly liaising with Alec Baldwin’s CIA director? The suspicion mantle is overworked, demeaning characters’ decision-making and suggesting their motives lack focus.

On the other hand, the film’s modern day socio-economic terrorism angle isn’t explored enough. Sean Harris’ Solomon Lane is an underwhelming villain. He relentlessly places misguided trust in Faust, which only serves to undermine his intellect. Lane is not a hulking enemy — a guy called the ‘Bone Doctor’ fulfils our hard-hitting desires — which is fine, but because we don’t comprehend his savvy as much as we should he never feels like much of a threat.

This sticks its tongue out until the very end and earns the right to be whimsical. There aren’t any attempts to sit at tables already reserved by other action staples. The film resultantly doesn’t have a sharp bite, which might be for the best given the flippant nature of its only moderately engaging thematic endeavours. Rogue Nation is still probably the IMF’s best outing to date though.