For Denis Villeneuve, Sicario marks something of a departure from Enemy’s odd intricacies and the personal anguish of Prisoners. It has more in common with the latter — a nasty streak and a bleak underbelly — but Villeneuve’s third English-language outing is a different beast entirely. It’s a very cold film. There is so much bloodshed that you almost become impervious to feeling, though attempts to humanise its various players are admirable and fairly successful. Sicario’s concerns are wrapped up in the (under)world of grisly cartels, and in how the war on drugs has fostered moral imprecision, even on the ‘good side’.

FBI agent Kate Macer (a brilliant Emily Blunt) is part of that good side, and one of only a few individuals whose outlook relays consistent righteousness. We realise instantly that Kate is both strong and capable, yet not at all infallible. Nobody is for that matter — when her team finds a myriad of deceased bodies plastered behind the walls of a house, physical and mental repulsion take over (there’s a lot of vomiting). This discovery triggers an IED explosion that kills two agents, setting in motion a covert investigation into some serious criminal wrongdoing. Kate, driven by a need for revenge, volunteers for the job.

She has to navigate a landscape dominated by important-looking men wearing suits and asking personal questions (“Do you have a husband?”). Josh Brolin’s Matt Garver is one of those men, an advisor-cum-field officer whose macho posture is supported by a spine of arrogance — for some reason he wears sandals during mission briefs. Garver leads the field operation, batting back Kate’s inquisitive questions with vague swings; you get the sense his unwillingness to reveal all has less to do with bureaucracy infecting law than it does pomposity.

Pitting Kate in amongst cowboys and sheriffs and gruff Texans with gristly beards seems to be Villeneuve and screenwriter Taylor Sheridan’s way of acknowledging reality while also challenging the effectiveness of a masculine culture. While most of the men — not all, Kate’s partner Reggie Wayne (Daniel Kaluuya) is similarly noble, though he too is portrayed as an outsider — are energised by the presence of their egos, Kate, indiscreet and somewhat inexperienced, is our key moral fibre. It’s through her gaze that we peer into an immoral world, and it increasingly feels like only her actions can reshape said immorality.

Sicario is clear in its admission that nothing is clear. People are neither good nor bad (in fairness some are quite bad) but instead exist somewhere along an ethical spectrum. A Mexican cop whom we visit throughout the film is shown interacting with his family, particularly his football-loving son. Joe Walker’s editing — which cuts from the search operation to the officer’s modest home — implicates the cop in some form of corruption, yet his family-conscious roots are never invalidated. The vast majority of people on-screen are treated as human beings, a trait often missing in films that depict warring factions (see American Sniper).

If government agencies and drug cartels are the factions at war, Juárez, Mexico is the battlefield. The city is introduced as a final level boss: maze-like, audibly inscribed with tales of dread, bookended by a pulsating score. It’s the urban equivalent of Everest’s Death Zone — the longer you stay, the more likely you are to die. Perennial, and future, Oscar nominee Roger Deakins often gives scenes time to breath, funding the perception of encroaching danger. Civic infection has wreaked havoc upon the people of Juárez, so much so that civilian life is now inseparable from criminal activity. Just ask Silvio, the aforementioned policeman.

Early on, we take a drive through the cartel capital in a stretch of truly exceptional filmmaking. It’s tense, eerily subdued. It makes you feel ill, and its conclusion ushers forth one of the most anxiety-ridden traffic jams in silver screen history. Following the film’s incredible opening third (which is ostensibly a 40-minute horrorfest) the pulse inevitable drops. What follows isn’t quite as interesting; it’s the downtime between assignments, where Kate and co. swan around bars and stare diligently at maps, invoked to add character depth.

One of those characters is Alejandro Gillick (Benicio Del Toro), the titular sicario. Del Toro saunters on screen parading a mystique that suggests he ain’t to be messed with. He folds his jacket even though it is already creased, a move that mirrors his make-up: externally unruffled but internally blazing. The actor has that grizzled veteran demeanour, his hitman reminiscent of Charles Bronson’s Harmonica in Once Upon a Time in the West. Gillick says very little, affording extra reverence to the few words he does speak: “You’re asking me how a watch works. For now, let’s just keep an eye on the time”. Or, in layman’s terms, conquering a complicated cartel network is inescapably complex.

Lines are blurred and identities masked in Sicario’s post-9/11 society. This is Zero Dark Thirty with a narcotic skin. There is a wonderful sequence that precedes the final act (at which point the tension re-escalates): darkened human silhouettes descend into the black abyss below a brooding, orange-tinted skyscape. It’s a sublimely serene moment in a film otherwise dominated by impending threat. The serenity, like life in Juárez, is short-lived. 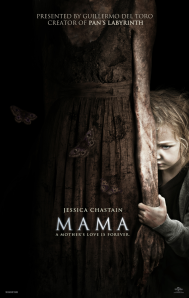 Although no director’s chair with his name on existed during filming, Mama has Guillermo del Toro’s fingerprints laden all over it. He is an executive producer this time, and the del Toro checklist brims with ticks in reference to this solid fantasy-horror outing that benefits a great deal from the presence of Jessica Chastain. Details are intricate and refined; visuals spring off the screen with life; harmonious sounds glide around with an air of mysticism. And just like in some of del Toro’s previous work (such as Pan’s Labyrinth and Don’t be Afraid of the Dark) the plot centres around an engaging, young female — only Mama demands two of them.

After murdering his wife and business colleagues then crashing his car in the snowy wilderness, troubled Jeffery is killed by a mysterious force that appears to be protecting his two daughters, Victoria and Lilly, from sharing a similar fate to that of their mother. Sometime later, a search for the missing girls funded by Jeffery’s twin brother Lucas (Nikolaj Coster-Waldau) proves successful and the two sisters are slowly reintegrated back into society under the parentage of Lucas and his rocker girlfriend Annabel (Jessica Chastain). However as time passes it becomes clear through consistently strange and distant behaviour that all is still not right with the girls.

Long gone are the days of atmospheric mind annihilation delivered by The Texas Chain Saw Massacre, or even nerve shredding tension served up during Alien. In 2013, you’d do well to uncover a film boasting these cherished characteristics of psychological horror and this is partially why we are subject to so many remakes and/or reboots. Creative ideas are at a premium (though not entirely obsolete) therefore the average mainstream horror output seems to be upping the technical anti as a compromise. Therefore Mama is a horror film that isn’t actually all that frightening, but is entirely watchable.

Why is it watchable? Proficiency in the visual department is partly responsible. The outside setting is rich. Old croaky shacks look and sound, well, old and croaky. First time director Andrés Muschietti bolsters the story with enticing monochrome-like flashbacks (or are they visions?) which are eerie and exceedingly well executed. Even the inclusion of a creature which would not be out of place surrounded by group of Dementors aboard the Hogwarts Express can be forgiven, as it moulds in appealingly amongst Guillermo del Toro’s fantasy visualisations. The illustrative prowess displayed throughout certainly adds a degree or two of watchability.

However, more than any optical standard set, the reason Mama deserves the attention of passers-by is Jessica Chastain. In a role that at first glance may seem a world away from her normal portrayals, Chastain’s rock ‘n’ roll chick Annabel actually shares a number of similarities with the actor’s previous characters. Although she is the sturdy anti-mother who squirms at the idea of pregnancy to begin with, Chastain soon becomes maternal and protective over the children, much like her venture into motherhood as Samantha in Take Shelter. Staunchly independent, yet perhaps not entirely equitable to the task, there are instances of Zero Dark Thirty‘s headstrong Maya here too. Forced into a situation out-of-her depth, there’s even a measure of insecurity present, akin to Rachel in The Debt. These qualities merge to create a character who is emotionally sympathetic and empathetic, and this is key in horror — we need to want Annabel to succeed in the face of uncompromising danger. Chastain is tremendous (though, when isn’t she?) and develops an unshaken dynamic with her two young co-stars who also do a stellar job. Nikolaj Coster-Waldau is even on hand to provide charm and stability along a potentially rickety road.

Of course the primary aim of any horror film is to scare, and the fact that Mama fails to do so often enough is a significant problem. The issue stems from perseverance with too many over-wrought elements aligned with the scare-fest genre. Not paying attention to odd happenings soon develops into ‘why does nobody believe me?’ until the ‘don’t go in the closet’ saga revs its rusty engine. There is a haunted house; a venture into some frozen, dark woods; heck we’ve even got time for a solitary cabin hidden in the trees (Bruce Campbell, eat your heart out!). When a semblance of fright is unveiled it’s always by way of unnatural stillness and haunting imagery. Sadly though, the BOOS! are back before long and don’t hold the same fear factor they did thirty years ago. A lack of innovation in this highly important aspect does let the film down, particularly when just about everything else is good.

As crazy as it sounds, maybe Mama would’ve been better off as a drama rather than a horror. It gets all the non-scary bits right, but is unable to juggle the workload and deliver what the viewers really want — frights and screams. Mama’s limbs are looking healthy, but her torso could be doing with a diet to rid all excess clichés.

Just don’t tell her that.